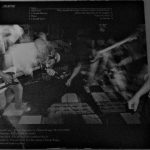 We all love it when a plan comes together. Such was the case when Stuttgart-based trio Buzz rodeo said they were available to play with local emo-rockers Nurse at their album release party in Le Poulpe. Meeting Ralph, Daniela and Helge was a blast and, on stage, the dry, angular and yet melodic noise-rock of the Germans seriously kicked asses. It came all the more as a surprise, then, to learn that the band had disbanded a few days later, putting their west-European tour to a brutal halt. So much for rock’n roll. Anyway, they let none of that out on that night and were happy to answer some of my usual questions. Here is what they had to say.

OK Buzz rodeo, let’s go  ! Your songs are really well built, noisy but very coherent, so I guess this is not your first band experience… Could you tell us a little bit about your musical pasts ?

Helge (drums) : The drummer of Bhang dextro left and then I came and we formed Are we electric ? together.

Daniela (bass) : I played in an all-girl band. A cover band.

How is the integration in Buzz rodeo going ? (Daniela has been in the band for one year)

D : Helge is my flying teacher ! He is such a good drummer that playing bass with him is like flying ! And Ralph, he is…

D : No, an endless source of songs… In three days, he can do…

That was actually my next question : what is the writing process to achieve these songs that you recognize almost immediately ?

R : I just come to the rehearsal and play some riffs… and the others build it up !

Your last album was published on a polish label – Antena krzyku -, can you pronounce that name for me ?

R : We say « Antena Kryschkou », but we don’t really know…it might not be the exact way… (Laughs)

Can you tell us a bit about this label ?

R : Its is 30 years old, at some time it was forbidden in Poland. Too political, or something like that… It’s a really cool guy who runs the label !

How did you meet him ?

R : He wrote to me on Facebook and we talked and talked and talked. I hadn’t noticed that he had a label. Three weeks later, he was like « Hey, I’ve got this label » and I was like « WHAT ?!! ». He has many bands on his label from all over the world. And not only noise-rock : hardcore-punk, balkan rock, he has all… But he loves noise-rock and post-punk ! He was the roadie for The Ex in the 80s and 90s, he was all over Europe with them.

D : And the best thing is that he doesn’t tell us what we should do…

R : Most of the promotion we do by ourselves, on Facebook…

Yeah, I’ve seen it once or twice… (Everybody laughs out really loud, Ralph being a serial Facebook poster.)

R : But you have to do this ! There are so many bands out there ! Many bands say fuck self-promotion, but it’s not my opinion…

Do you think this has changed ? In the 90s, there used to be quite a lot of fanzines that bands would use for their promotion…

R : And Skyscraper magazine and Copper press. And Magnet magazin in the 90s. And another German one in the 90s : Spex.

D : But the change is that you have more direct contact with fans. With social media, you collect them step by step, you talk with them directly. We send the teeshirts, the records by ourselves…

R : We write little messages, include them in the package. We built this Buzz rodeo thing mostly on Facebook.

R : Local networks yes but not with the local scene… Not so many bands and they are much younger than us. But we have connections all around the world. The guys call us : Hey, come to Russia, come to Australia ! The next step would be to tour the US but… we are afraid of Trump ! Could be a horror trip !

Are these easy connections all good experiences ?

R : In general, you can rely on people, yes.

You seem to be very active : writing, recording, touring. Do you have music-related jobs ? Or flexible jobs ?

R : I’m a landscaper. Self-employed, so when we play, I have no money. But I can do what I want.

D : I’m in a sound studio that does advertising : radio spots, TV spots and videos… The day has 24 hours and it’s always full. When I do stuff for Buzz rodeo, I can’t work so much. But it’s OK.

Can you tell what bands are worth listening to in Germany right now ?

R : German bands ? That’s the hardest question ! (Laughs) Heads…. Not many that I prefer listening to…

H : You have to take a few minutes to think about this… Kurt… Ten Volt shock is cool ! Yass…

R : Party diktator. They have a new band called Waran… I personnally listen to American or UK bands : Blacklisters, Usa nails… And all the 90s stuff : Touch and go, Amphetamine reptile, Dischord, Trance syndicate… This shit… And I love Peru, from Poland. they’re great !

H : Frana… Porch… We toured with them in the UK.

You – especially Ralph – seem to be real noise-rock freaks, how would you define the essence of it – the philosophy of noise-rock – to people who don’t know about it and surely want to know ?

R : My roots are more in the UK post-punk scene. The Fall, stuff like that… Television personalities, Gang of four are my personal favourites. The guitar-player is god !

D : Music just makes peole feel something. You can say I love that but you can’t say what the philosophy of it is !

R : A new record is in the works : fifteen new songs ready to be recorded. We hope we can go to Blackbox studio, in France. We have contacts with Albini too but it was too expensive for us. But it would be a good thing, recording with him in the near future.

So you’re planning to have the new album out this year ?

R : Yeah, on the same label, Antena Kryzku. Of course.

On latest news, Ralph has started a new band project with Sasha (ex-Frana) on drums and Daniel (Buzz rodeo sound guy) on bass. To be continued…

All black and white pictures are from Dylan D. Breed. Thanks to him again.